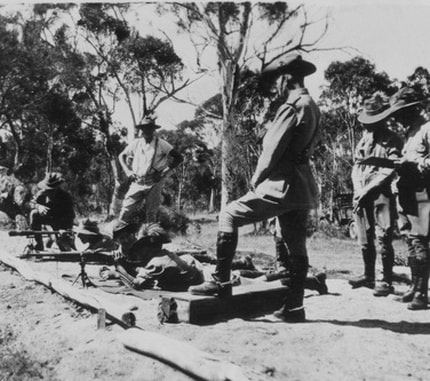 World war 1 veterans at the rifle range
The northern boundary of the present reserve was formed during the early 1890’s when the township of Narrogin was no more than a tiny cluster of structures beside the new railway. The road stretching east from Williams through this hamlet was then the track known as the Coolgardie Road.  In later years it developed into the Williams Road.  Similarly, the southern boundary was formed in 1905 when the first stage of the Collie railway was built between Narrogin and Williams.
At about this time too, the ridge of high land on the eastern edge of Foxes lair came into use as commonage where people could graze their cows.  A narrow triangle of land through the present reserve was allocated to the railways, presumably to supply material for construction, and small reserves were designated in other areas as official sites for gravel quarries.
At the commencement of World War 1 the need to stimulate military awareness and get men familiar with weapons led the Defence Department to construct Narrogin’s second rifle range along a flat area of Foxes Lair.  This range with its high stone “butt” was created between late 1914 and early 1915 and officially opened on 31 January 1916.  In later years the range was extended eastwards over what is now Range Road by the Narrogin Rifle Club, with a wooden tower (now long dismantled) being erected instead of a 700 yard mound in the late 1920’s.
Soon after World War 1, in 1920-22, Narrogin’s first water supply scheme was constructed.  Bottle Creek to the west of Foxes Lair reserve was dammed and water fed to the still existing concrete Reservoir built at the north-west corner of the reserve.  A three-inch main leading straight down the hill towards Forest Street took the water to the town by gravity feed.  The 23 acre strip of land between this pipeline and the Williams Road was classified as Reserve No. 23152 and dedicated to water supply purposes.  The workers’ camp was constructed slightly below the Reservoir on the townward side, and the remains of the huts foundation pads are still visible in the bush that now covers the site.  The water scheme was officially opened by the Premier, Sir James Mitchell on 25th November, 1922.
The first move to conserve part of this natural bush area took place when some 95-100 acres in the centre of the reserve and south of the water supply area were gazetted as Class ’A’ Reserve No. 20605 and vested in the Municipal Council as a National park.   This took place on the 27 January 1931.
During World War II the urgent need to remove aircraft fuel supplies from the coast to inland storage resulted in No. 25 Inland Aircraft Fuel Depot being constructed beside the Collie railway line in the commonage.  Built in 1942, the depots four cylindrical tanks held 350,000 gallons of high-octane fuel during 1943, but stood empty after June 1944.  The remains of the depot are still there within the original man-proof fence. Soldiers stationed in Narrogin used the commonage for manouvers.
By 1945 educational authorities were deciding where to locate the town wing of the proposed Narrogin High School.  As the Narrogin School of Agriculture, several miles out on the Williams road was to be the agricultural wing, it was felt that the town wing should be erected on the western side of town. An area on the north-eastern corner of the Foxes Lair reserve was considered, but the proposal was rejected because of the difficult rocky nature of the site.
Two years later, in 1947, a serious attempt was made to develop a conservation plan for the National Park.  Led by Councillors Dr Jack Savage and Fred Barnett, Town Council supported the idea of developing a sanctuary for native flora and fauna and of eventually establishing a community hostel there to attract tourists, perhaps on or near a central hill which commands a fine view to the east. Dr Jacobs enthusiastically submitted excellent proposals for such aspects as fire control, prohibiting the picking of wildflowers, countering the growing problem of rubbish dumping and involving children in the care of the area.  Although a committee was formed, the idea soon died through lack of funding 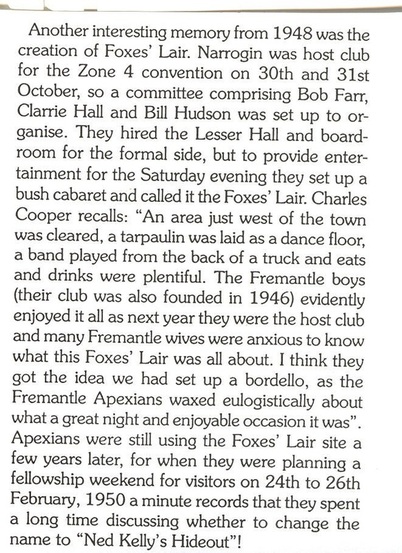 Extract from Apex newsletter
In 1948 the name “Foxes Lair” came into being. Wishing to entertain fellow Apexians from Fremantle in a bush setting out of the town, the newly formed Apex Club of Narrogin cleared the site of the present barbecue area. Fortunately, the club decided to call the spot “Foxes Lair” and rejected the other, much more dubious names that were proposed at the time by those keen young men!
1950 saw the Water Supply Department agreeing to surrender Reserve No. 23152 to the Town Council. This strip beside Williams Road was then added to the area of National Park, except for a narrow reserve half a chain wide in which the pipeline form the reservoir to the town was still in use.
In the early 1950’s Town Council was also trying to enlist the aid of the Town Planning Commissioner, in drawing up plans for development of the reserve. When the Commissioner was unable to comply and Council could not afford to hire a private consultant, this move also died.
During the winter of 1955 the Forests Department created the arboretum on fairly level ground to the north of the rifle range. Many of the trees planted grew reasonably well and are still there.
By the late 1950’s the political situation for the Aboriginal half-caste population was beginning to improve. For many years the majority of these people had lived on Aboriginal reserves created on the fringes of the town, and others, both local and itinerant, had camped out in bush areas close to the town, including the present Foxes Lair Reserve. However, the need to help aboriginal people to make the transition to living in ordinary town houses was becoming increasingly recognised. Consequently, in 1958-59 four basic, transitional dwellings were erected  immediately to the east of the war time fuel depot. A few years later another two houses were erected on commonage land south of Floreat Street. None of these buildings lasted for many years, but the sites are still clearly marked.
In the early 1960’s the Narrogin branch of the Tree Society became involved with the National Park and Foxes Lair barbecue site. Members drew Town Council’s attention to the lack of control over rubbish dumping and the indiscriminate removal of gravel. They requested that the area be fenced in, with no vehicle access. Council could not afford large-scale development, but bush roads were cleared to the barbecue site. This was achieved, with the Tourist Development Authority paying ₤120 towards the cost of ₤202. The Tree Society also compiled the first comprehensive map fo the tree reserve, and in 1962 Vincent Serventy strongly advocated that local schools be involved with conserving the area.
The Narrogin Rifle Club disbanded in the 1960’s, but the shooting mounds can still be seen.
In 1971-72 Town Council sought permission from the Department of Lands and Surveys for a local resident to be allowed to build a home on a quarter acre block facing Williams Road so that he could become warden of the park. This move failed, as did an approach to the Tourist Development Authority to subsidise the development of a wildlife sanctuary in the National Park.
For the next two decades little of significance was done. However, a fire orienteering map was published in 1980, and the area has been used since then on occasions by the Orienteering Association of WA. On 30 November 1978 the two major reserves, No’s 20605 and 23152, had their classification changed from “National Park” to“Recreation and Parkland” and in 1986 a comprehensive fire protection plan was drawn up. The need for this had been underlined by a number of serious fires – a large controlled burn in 1973-74 and wildfire’s in 1982 and 1985. By the early 1990’s Town Council was making an attempt to limit environmental damage caused by off-road vehicles by erecting signs and barriers across minor roads to the reserve that were bypassed.
In 1995 REEP project saw more work to eradicate noxious weeds, especially the rapidly spreading golden wattle (Acacia pycnantha) which is not native to the area.
In 1998 Town Council workers bulldozed a 'walk trail' between the barbecue area and the railway dam reserve to the south of the Foxes Lair Reserve. This aroused adverse comment and resulted in the formation of the Friends of Foxes Lair. This group produced a development plan to reverse the degradation and created walking trails and other facilities. Since then the group in partnership with the Narrogin Shire Council, and with assistance from many others has greatly improved Foxes Lair.
In 2014 the Shire Council finalised a Foxes Lair management plan that can be viewed ﻿here.﻿