Landscapes and Soils of Foxes Lair

​​Foxes Lair is an upland on the south-west edge of Narrogin. It has a sloping lateritic plateau adjoining Williams Road bounded by breakaways, an east-west valley and then an east-west ridge with rock outcrops, plateaus, and variable soils. 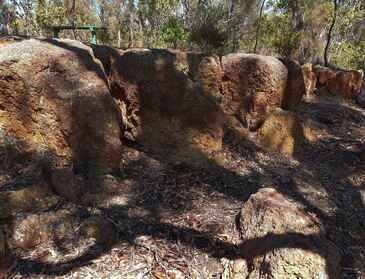 Ironstone on breakaway edge
The sloping lateritic plateau contains ironstone gravels and sandy soils, which are underlain by pink to white clay called the pallid zone, which overlies granite basement rock.  It is millions of years old. During this time local proteaceae shrubs (including grevillea, hakeas, and dryandras) with soil microbes have created lateritic gravels from iron in the soil to form an upland plains. Over time waterways have eroded into the plain. Iron in the soil water precipitated on ridges and plateau edges to form a layer of hard ironstone. This resists erosion, but the underlying pallid clay washes away undercutting the ironstone to make  a steep slope called a breakaway. Old lateritic plateaus are on uplands throughout the district
Below the breakaways a range of soils occur on the slopes, and in the valleys where more fertile soil has formed from underlying granite rock.
​​The east-west ridge is the remnant a line of magma that welled up from of a rift (Binneringie Dyke) in the surrounding granite  two billion years ago. The magma was mostly mafic (black iron-rich rock that forms red clay soil) with some felsic magma (granite rocks, which form sandy soils). Gravelly ironstone soils that formed on the dyke, but most have eroded away. The ridge remains because mafic lateritic gravels are more erosion resistant than those formed from granite. Over millions of years less resistant granite soils on either side eroded away to leave the mafic ridge. Apart from a few remnant gravelly plateaus, the ridge consists of mafic and granite rock soil, which supports wandoo, York gum, and rock sheoak woodland.
One can often identify soil types from the trees and shrubs that grow on them.
​See also