Trees in the Narrogin district

Jarrah Eucalyptus marginata
A tree to 30m in height with grey-orange fissured bark that can be easily pulled off in strips to reveal an orange reddish colour. It produces cream flowers from spring to early summer. Jarrah is common in the Darling Range and further west on stony gravels and well-drained infertile deep gravels and sands, but also overlies bauxite deposits. The scientific name marginata refers to the orange-red margins of the leaves, and the name Jarrah is an aboriginal word for the tree.
As Foxes Lair is on the western edge of its distribution, Jarrah only occurs on the Banksia Walk near the water tank and trees are smaller than usual.
A very durable and water resistant wood that was widely used as structural material for bridges, wharves, railway sleepers, ship building and telegraph poles. Its long, straight trunks of richly coloured and beautifully grained termite-resistant timber make it valuable for cabinet making, flooring, panelling and outdoor furniture. Aboriginal people made spears from jarrah.
More information: Wikipedia article
Marri Corymbia calophylla
Marri is the main tree on lateritic sand and gravel soils, often with Parrot Bush (Banksia sessilis) understorey.  Foxes Lair is on the eastern edge of its range, and some trees have died in recent dry seasons. The name "Marri" is from the Nyoongar word for blood - applying to the red gum. Also known as Medicine tree because the red gum was sprinkled onto wounds to prevent bleeding or mixed with water to be used as a mouthwash or disinfectant. The powdered gum was used to tan kangaroo skins
Marri is a tree of majesty, able to attain a height of 60 metres. Its brownish bark is rough and tessellated and often has exudations of reddish gum (kino). It has characteristic discolourous leaves with the underside being a lighter green than the top. Cream flowers appear from December to May, with most abundant flowering during February. Seeds in the large ‘Honkey nuts’ are a staple diet for the endemic red capped parrot and summer visiting Carnabys cockatoo.
Being weak and laced with gum veins and difficult to burn, Marri wood was of little commercial use until recent advances in woodwork. It is now used as a specialty timber for furniture and timber floors. Marri is an excellent honey tree and is invaluable for wildlife, particularly the old trees with nesting hollows. Huge dead ‘stag’ trees are of particular value for the Australian Shelduck and Australian Wood Duck that nest in them in winter.
More information: Foxypress/in praise of dead trees , Foxypress/ Marri decline, Wikipedia article , Marri nectar

Silver mallet Eucalyptus falcata
Silver mallet is a beautiful silvery-grey trunked mallet that does not occur in Foxes lair but can be found in places in Dryandra (Darwinia drive). It occurs on gravelly uplands often with brown mallet and blue mallet, and is more common in the mallee region to the east.
It may be confused with wandoos as both have silvery grey trunks and may occur together, but silver mallet has Y-shaped branches and shiny leaves that tend to be grouped in layers, whereas wandoos have dull leaves in bunches a bit like broccoli.
Salmon gums may also be confused with silver mallet as both have silvery grey trunks and shiny leaves, but silver mallet has Y-shaped branches and only occurs on gravelly uplands, while salmon gum mostly occurs on clay soils.
Powderbark  Eucalyptus accedens
Powderbark  uses water repellent soil to eliminate competition like brown mallet, but is a tree and occurs mainly north of Narrogin on dry gravelly slopes and uplands. It does not occur in Foxes Lair but is very common in Dryandra woodland.
Powderbark  may occur with (usually upslope of) wandoo, with both having smooth pale bark and dull green leaves. Powderbark  can be distinguished by  its seasonally orangey coloured powdery coating on the bark of E. accedens, its larger, more rounded buds and its distinctive rounded juvenile foliage.
Rock sheoak Allocasuarina huegeliana and  Salt sheoak Casuarina obesa
These are relatively short lived trees have needle-like branchlets that are not leaves, although they function as such and photosynthesis occurs in them. The leaves are reduced to tiny papery teeth (bracts) arranged in whorls at intervals along the branchlets. They have male and female plants, with males producing large amounts of pollen that fertilises cones on females.
Salt sheoak only occurs naturally in semi saline lakes and waterways, and is planted on salt affected land. Extensive areas occur at Toolibin lake.
Rock sheoak was originally a feature on sandy granitic rocky soils ( that is excellent orchid country), but is a  coloniser that has spread extensively on roadsides and cleared areas. Male plants turn bright orange when producing pollen. 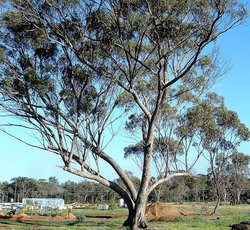 York gum
York gum loxophleba subsp. loxophleba
York gum only occurs on rocky red-brown clay loam soils around the Granite Walk car park, but becomes the dominant tree in association with Jam wattle on the rocky ridge of the adjoining Commonage and Railway Dam. Being formed from ‘fresh’ granite and dolerite rock, York gum soils are amongst the best agricultural soils, so relatively little of the once extensive forests remain, but they are common on road verges. A few rare York gum/wandoo hybrids occur on the southern tip of the Claypit Walk.
York gum is a medium sized rough barked straggly, many branched tree with greenish to coppery brown upper branches. Leaves are shiny green and white flowers show in September to November.
York Gum has a very hard attractive wood but it is generally not available. The York gum mallee form E. loxophleba subsp lissophloeia is grown on farms for revegetation, and hopefully one day for eucalyptus oil.

More information Florabank factsheet
Red morrel Eucalyptus longicornis
This is a majestic rough barked tree that is most common east of Narrogin. It can be confused with York gum as both have dark rough bark and shiny leaves but red Morrel generally is a large single stemmed tree with slightly less coarse bark, York gum tends to have more stems near the base and has a different shaped fruit (nut).
It favours well drained soils with a higher salt content, and is very distinguishable on wind deposited silty soils around salt lakes and on red-brown gravelly soils  based on laterite formed from mineral rich mafic (black) rock. 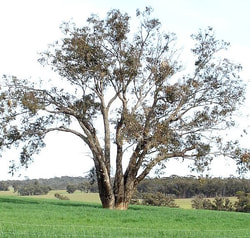 Flooded gum
Flooded gum Eucalyptus rudis
Flooded gum has virtually died out in Foxes Lair but occurs on the waterway that crosses the road downslope of the Granite Walk car park. This tree is widespread in waterways and on winter wet slopes west of Wickepin. Each spring these trees are almost defoliated by leaf attacking insects, and its range is declining due to dry seasons.
Flooded gum is a medium sized, rough barked, straggly, many branched tree with shiny green leaves and white flowers in spring. It can be distinguished from York gum by ivory coloured upper branches and more damaged leaves.
Further information Florabank factsheet

Jam Wattle Acacia acuminata
Jam or raspberry jam wattle is a small tree that usually occurs with York gums, being most common on soils formed from igneous rocks like granite and dolerite. It can be distinguished from manna wattle in flowering in spring rather than autumn, having oblong rather than cylindrical flowers, and shiny sharp-tipped leaves. Jam has very dense wood that gives a strong strawberry jam aroma when cut, and was widely used as fence posts by farmers. The wood that has rich brown heartwood with a pale sapwood is highly valued for wood turning.
More information Florabank factsheet, Wotsa wattle blog Science blog
Manna wattle Acacia microbotrya
Manna wattle is an autumn-flowering small tree with masses of small globular flowers that occurs on all soil types, but is more common than jam on gravel soils. The common name comes from copious edible gum that exudes from stems after insect attack. Those of you who remember the days when one had to lick postage stamps before placing them on envelopes, may not know that you were licking acacia gum (called gum arabic). I have talked to Noongars who used to chew the gum as kids. There is no taste but the practice is not recommended for those with dentures (exceptionally sticky)
More information wotsa wattle blog, Manna wattle blog
Mallees
Mallees are multi-stemmed woody plants usually less than 10 metres high that are particularly common in the south-eastern wheatbelt. Several stems come from a lignotuber ('mallee root') when one or more are lost. Mallees that have not had to regenerate may have a single stem.
Many mallees are able to create texture contrast (sand or loam over clay) soils, and have special root systems that enable them to store soil water away from other plants. Mallees in Foxes Lair are 'sandplain' species, Eucalyptus aspersa, E.intrasilvatica, and E. incrassata that are scattered on lateritic gravel soils. These species have white flowers in summer and look similar to the casual observer. Drummonds mallee  E.drummondii is  a lovely mallee that is common on poor sandy gravels in the district.