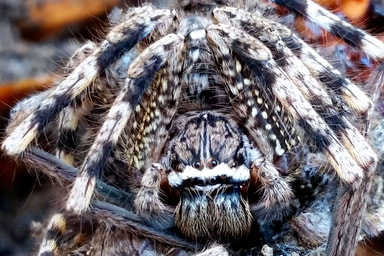 Badge Huntsman
Huntsman spiders (family Sparassidae Holconia sp.) do not build webs, but actively hunt at night and hide during the day behind bark or narrow recesses. As they can flatten their legs (laterigrade), they can move sideways and crawl into surprisingly narrow cracks. they are commonly seen crawling on walls and ceilings in houses. Due to their size and general hairy nature, these spiders are also called Tarantulas or Triantelopes, although a range of unrelated large spiders worldwide are called the same. Huntsman Spiders have 8 eyes in 2 reasonably straight rows. The four lower eyes are usually larger than the top four and closer together. Males may be of similar overall size, but have a smaller body and longer legs.
Badge or shield huntsman spiders( Neosparassus sp.) are smaller spiders with a conspicuous colour pattern on the underside of the abdomen.
Further information
Foxypress blog
Esperance Fauna: Badge huntsman spiders ;   Huntsman spiders      .
Myrmician spiders of WA -Sparassidae