Mesas and breakaways in the Narrogin district 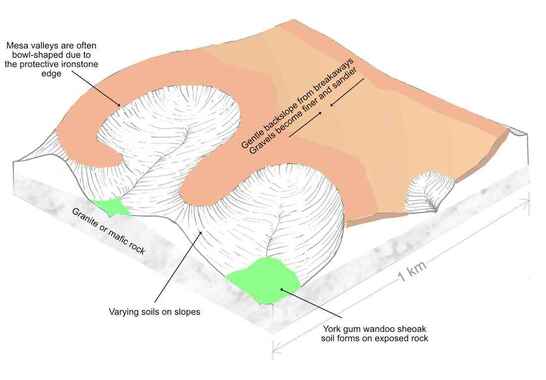 diagram of a mesa and breakaways
Mesas are lateritic gravel flat-topped hills with steep sided slopes on one or all sides called breakaways. A good example is the Breakaway Walk. Most mesas have a dense ironstone cap, which is underlain by softer lateritic pink to white clay. The steep breakaway slope forms when erosion of the clay layer causes ironstone blocks to tumble downslope.  Brown mallets which are generally only found around breakaways,  keep the slopes bare.
​
Mesas are the remnants of a gently undulating lateritic gravel landscape which first formed about 100 million years ago in a moist climate with the evolution of the Proteaceae plant family.
Over millions of years there were llong term climate fluctuations. Arid periods were very dry cold and windy. Very occasional rainstorms created gullies in plain, which had few plants to protect the surface. When a wetter period returned, plants formed more laterites on uplands and on material washed down slopes - until the next arid period
Over millions of years soil from valley and slopes washed away to the ocean, and ironstone protected mesas stood higher in the landscape.

Have you noticed that many ridges and hills in the district have reddish stony laterites, reddish brown clays or dark mafic rock such as dolerite?
Mafic rocks contain have more iron, which makes mafic gravels more resistant to erosion than sandier granitic gravels. Over millions of years mafic areas have become higher in the landscape as surrounding granite laterites have eroded away.
These diagrams show how mafic rock areas have become higher in thelandscape. for more information see the file below