A. Orb weavers that remain on the web during the day 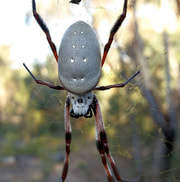 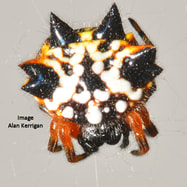 Christmas Spiders Austracantha minax webs are commonly seen between trees in summer in Foxes Lair in December/January. Active during the day, often in groups. Eyes on two equal rows. Four located centrally with other 4 wide laterally.

More information:
Christmas Spider
Garbage Line Spider Cyclosa trilobata is a day-active spider in an orb web with radial lines of thickened silk (stabilimenta) that contains the remains of their prey with the spider hidden in the line in the centre of the web. The elongated abdomen has two distinctive humps. Eyes on two equal rows.
More information: Foxypress blog
Argiope genus spiders often have a carapace (head) clothed in silvery hairs have thickened silk decorations  (stabilimenta)
More information: Arachne website . Myrmician spiders of WA

Leaf Curling Spider Phonognatha graeffei  has an orb web that is often partial or damaged, with a curled eucalypt leaf in the centre. It is very common in Foxes Lair shrubby woodland in summer. The spider is rarely seen outside the curled leaf.

More information:
Foxypress blog  Leaf Curling Spider
B. Orb weavers that build a new web each night
At  dawn these spiders eat their web and hide during the day 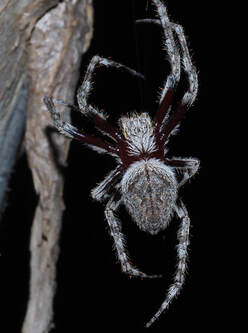 B2 Garden and Desert orb weavers have very spiny legs and hide in foliage during the day. Eyes are on two equal rows: Four located centrally on small stalks with the other four wide laterally.

Garden Orb Weavers Eriophila, Araneus sp. are common in gardens and bush.
​Desert Orb Weavers Backobourkia sp. are mainly seen in the bush; they have a white triangular mark at the front of the abdomen and relatively strong spines on the back.
​
More information Myrmician spiders of WA Eriophila
B3 Stick spiders Poltys species sit immobile during the day on twigs or stems with legs folded high above their carapace to resemble a dry broken twig or nut and weave an orb web at night.