1 The Wolf Spider (family Lycosidae) is the most commonly seen spider in the garden. They are less visible in the bush during the day, but their gleaming eyes are visible at night by torch light. Wolf spiders are robust, agile hunters that live on the ground in leaf litter or burrows. They have eight eyes, four small ones lower down on the face, two large eyes above looking forward and two large eyes further back looking upward.
The surface colours are mostly browns and greys with some distinctive surface markings.
Further information: Foxypress-Wolf spiders ; Myrmician-Lycosidae 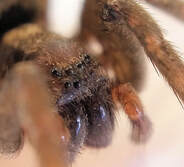 2 False Wolf Spiders/ Prowling Spiders (family Miturgidae) are often mistaken as wolf spiders, but their eyes lack the characteristic square pattern of 4 large posterior eyes. Miturgidae have eight equally sized eyes in two rows that may be slightly curved. Spiders are usually light brown to grey, and may have lighter stripes running along the body surfaces. Unlike wolf spiders, they do not live in ground burrows but may have resting webs near the ground.
Further information  Myrmician-Miturgidae
The Miturgid agelenina type spider on the left below hides in the base of a globular resting web intertwined in an Allocasuarina michrostachya shrub.

Nyssus coloripes front legs often orange
​3 Swift spiders (family Corinnidae) are very fast moving and active in the day. Eight eyes in two rows with the posterior eye row procurved.  Nyssus sp have black and white markings, and are frequently seen darting around between clumps of leaf litter. They hide in silken sacs when not hunting.