Why are the Plants and Soils in Foxes Lair so Diverse?
The answer is a bit complicated, but is a combination of rock types, plate tectonics, climate, and organisms competing to get the upper hand.

Geology
This region is a very stable piece of continental rock called the Yilgarn Craton that is mainly composed of light (silica-rich, felsic) rocks that form sandy surfaced soils. In contrast rocks under the ocean floor are dark heavy, and full of heavy (mafic) minerals that form red brown loam to clay soils
Heat from the earth’s interior caused mafic rock to well up in mid ocean rifts that pushed huge ‘plates’ of continent and sea floor apart where they collided with other plates to create larger land masses, mountain chains and volcanoes in a process called plate tectonics. These rejuvenate soils by bringing new rock to the surface and steep slopes assist its breakdown.
Although plates collided around it to form the Gondwanaland supercontinent,  the Yilgarn Craton stayed largely unaffected above sea level. Soils slowly formed and were eroded and transported into surrounding basins and seas. However stresses in the rock caused cracks in the craton and liquid mafic rock squirted up from depth to fill the cracks that form lines of heavy black rock called mafic dykes. Foxes Lair straddles a the huge Binneringie Dyke that stretches from Quindanning to Coolgardie. Red soils from this dyke are exposed on the southern edge of Foxes Lair.
However when Gondwanaland split and Western Australia separated from adjoining India and Antarctica, land movements caused large changes in climate and river direction. See below.
Biology
Vegetation is a good indicator of the soil underneath. For example, Marri (Corymbia calophylla) grows on sands and g﻿ravels﻿, brown mallet (Eucalyptus astringens) on mottled clays below the ironstone, wandoo (Eucalyptus wandoo) on the sand over clay (and other soils), and York gum (Eucalyptus loxophleba) prefers fertile soils that have formed from fresh granitic and mafic bedrocks. The Foxes Lair landscape is a mosaic of ﻿laterite﻿ uplands, slopes and rock outcrops that supports over 250 wildflower species, many of which are only found in a particular area.
Recent research has shown that most soils in the reserve have been created by distinctive vegetation that favour them and restrict competitors. 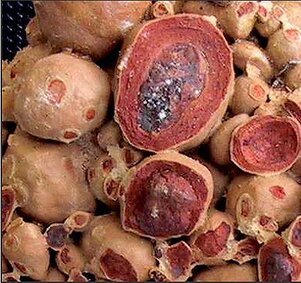 iron layers in gravel
Good examples of this are lateritic gravels and mallet breakaway soils.Many soils in Foxes Lair are lateritic (gravelly) with lots of brown round stones that are high in iron and aluminium. These soils contain the bauxite deposits that are mined in the Darling Range to the west.
They have diverse and colourful wildflowers that are mainly from the Proteaceae (banksias, hakeas, grevilleas etc) and Casuarinaceae (tammas, sheoaks) families. These dominate here because they can extract phosphorus (a scarce nutrient) that is unavailable to most plants on these soils. They do these with special cluster roots that release an organic acid in to the soil in winter.  The acid dissolves phosphorus for the plants to use. Iron that causes the red and brown colours in soil, and aluminium are also dissolved. Soil bacteria then use the remaining acid for food, and in doing so, cause the iron to become solid again (precipitate), on gravel stones in the topsoil or down plant root channels. If you look inside gravel stones, you will notice the iron layers.

Over thousands of years, a laterite profile forms. This commonly has gravelly topsoil is underlain by ironstone, a mottled iron rich clay (mottled zone), a white clay (pallid zone), and finally the crystalline rock (light granite or dark mafic dolerite).
Laterites vary greatly. Variations include:- Most have a dense ironstone cap that is underlain by pink to white clay that erodes rapidly, causing ironstone blocks to be undercut and fall down the slope.
Climate and geological uplift
Wetter climate and good drainage favour the formation of lateritic soils once 100 to 300 million years ago warm moist weather favoured laterite formation on most of the uplands in the agricultural areas, but this has varied over time.
About 100 million years ago and less the  final separation of Western Australia  from India then Antarctica, caused the gradual uplift of the Darling Range, other movements that blocked some west flowing rivers and reduced inland rainfall. This led to our present broad valleys in the east, and more active valleys to the west where rivers have forced their way through the Darling Range.
These events have coincided with a long term change in our climate to alternating wet and arid climate cycles with intervals of several thousands of years.
Wet cycles favour gentle landscapes and laterites. Dry cycles coincide with cold weather.  barer soils. infrequent flash floods  and very strong winds, caused salt lakes and adjoining dunes, and eroded uplands that we can see as rock outcrops, lateritic mesas and breakaways.
This cycle continues today and we are currently in a wetter geological period  (excluding man made climate change).